Agriculture is the number one industry in the Central Valley and in California, making the management and use of irrigation water of upmost importance, and requiring a workforce trained in the latest technology.

The Irrigation Technology Program at Modesto Junior College marked a milestone on April 28, 2017 as the first graduates participated in the Commencement Ceremony.  Upon completion of the program’s second year, it awarded five Associate of Science (A.S.) degrees and 14 certificates of achievement.  This is not only a first for MJC, but for California as well, because MJC’s program is the first A.S. degree in irrigation technology in the state.

As graduates crossed the stage, faculty began to look back to the program origins and ponder its continuing direction.

Providing the agriculture industry with skilled irrigation technicians was the goal from day one.  New courses, certificates, A.S. degree, equipment acquisition, facilities development, student travel, and industry connections all have played a part in the program’s development and achieving its goals.

Aside from graduates, the program’s greatest achievement has been the placement of the students into the irrigation workforce.  Of the 20 current irrigation majors, 16 are currently employed in this industry, either in a full time permanent position or in a paid summer internship.

Industry partners have played a pivotal role in placing the students, which has proven to be a win-win for all parties involved.  Meras Engineering, Modesto Irrigation District (MID), Irrigation Matters, East Stanislaus Resource Conservation District, Pacific South West Irrigation, California Almond Board and Central Irrigation are a few of the partners that have hired both first-year students and graduates.  The Irrigation Technology program is actively working to strengthen these partnerships and develop additional ones in order to provide students with hands-on experience in the irrigation industry. 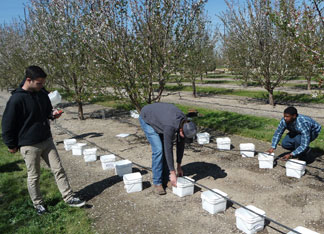 “I strongly believe that the program prepares you to enter the workforce as an asset to whichever company you begin working for,” said Ryan Lehikainen, an irrigation designer for Central Irrigation Company, who graduated from MJC in April with an A.S. degree in both Agriculture Business and Irrigation Technology.

Lehikainen stated, “The most valuable part of the Irrigation Technology program, I believe, is the ability you have to prepare for and take the Certified Agricultural Irrigation Specialist test that the Irrigation Association gives.  Also, the MJC program has a director who truly cares about the success of his students and makes you feel that if you put forth the effort, you will succeed not only in the program but in the career path you choose once you have moved on from the college.”

Training students for careers in the irrigation technology involves a combination of classroom work as well as outside activities and field trips.  Recently two staff members and 12 students visited irrigation industry sights in Oregon and Washington, and Walla Walla Community College’s Irrigation Technology Program which is the only other irrigation AS degree on the west coast.

“It was a great experience to see irrigation manufacturers and working systems that are not common in our area of Central California, and celebrating the end of a successful school year,” said Steve Amador, MJC professor of agriculture.

Looking to the future, MJC’s West Campus irrigation facilities will be 100% functional by the start of the 2017 fall semester.  A reservoir has been dug and tied into the MID system, and the pumping stations are in the process of being installed.

“Watch for a facility open house prior to the beginning of the 2017-2018 school year,” noted Amador. “The open house will provide an opportunity for MJC to demonstrate the new facilities and thank those who helped make it a reality.  We’d like to say a sincere thank you to everyone who has supported the program’s development by providing industry support and direction in order to make MJC Irrigation Technology a success.”