Modesto Junior College’s Arts, Humanities and Communications Division is staging Church & State on January 25-27 and February 2-3 at 7 p.m. and February 4 at 2 p.m. in Room 222 of the Performing and Media Arts Center on East Campus, 435 College Avenue, Modesto.

Church & State, written by Jason Odell Williams, is a timely play about faith, politics, and the power of social media. This dramedy is a witty, thought-provoking look at the politics of religion and gun control, and the danger and power in telling the unfiltered truth.

Set three days before Election Day, incumbent U. S. Republican Senator Charles Whitmore is up for re-election in North Carolina. Polls put him in a dead heat with his opponent until an indiscrete remark to a blogger on guns and God suddenly puts him in a risky political situation. 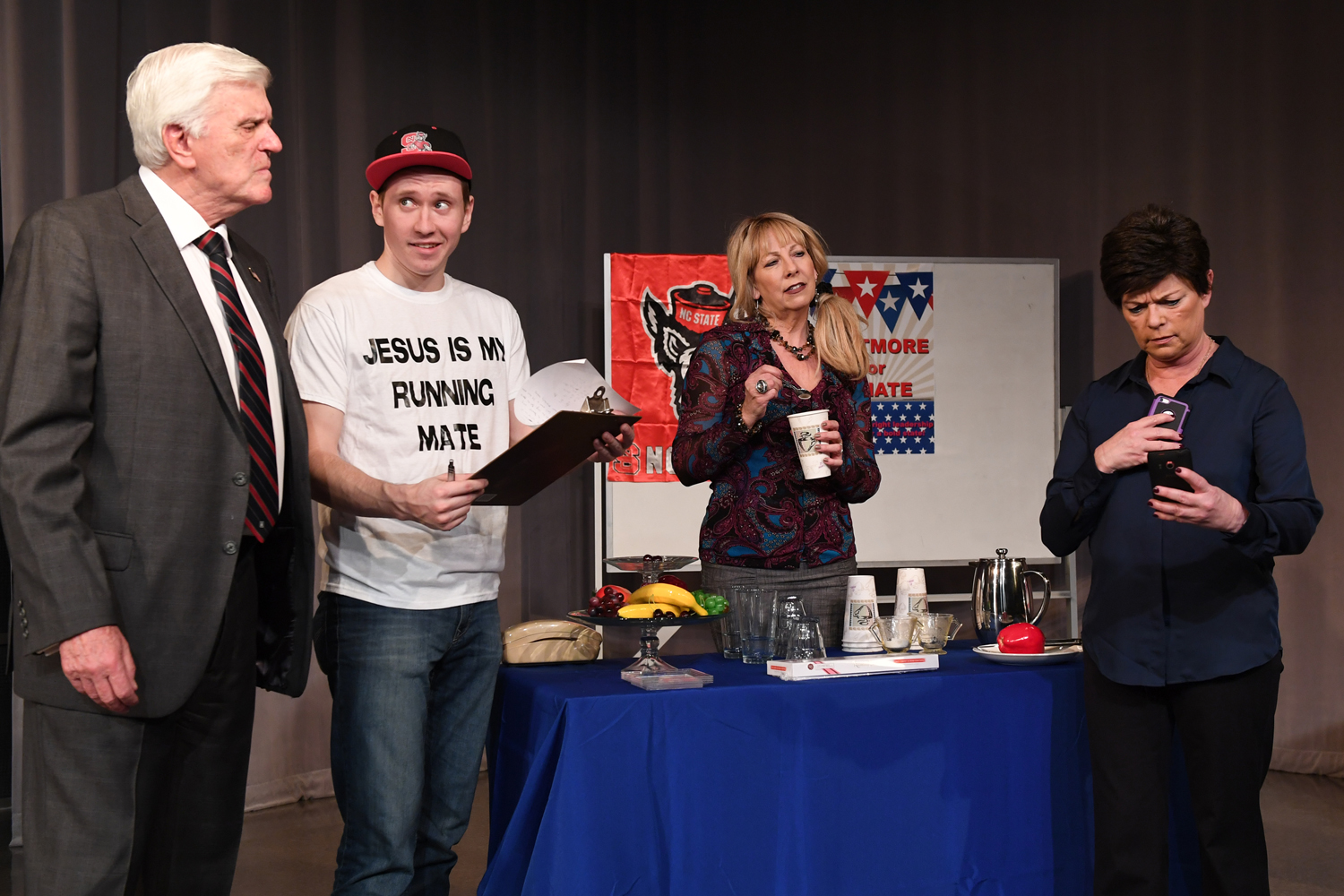 Williams states in an author’s note of June 2016, that the idea for the play began with the massacre at Virginia Tech in 2007, followed by the shooting of U. S. Representative Gabby Giffords and 18 others in 2011, which was followed by a barrage of other mass shootings. He dedicated Church & State to the Virginia Tech, Tucson and Newtown tragedies.

The play begins just after a school shooting in Raleigh, the hometown of Senator Whitmore, a tragedy that traumatized the community and the Senator, who visited the school site immediately after the shooting. Though his TV ads still promoted him as a protector of Americans' Second Amendment Rights, he now has doubts about his stance on guns— and experiences a crisis of faith.

“I hope this play raises questions, sparks debate, makes people laugh and cry,” states Jim Johnson, production director and actor playing Senator Whitmore. “And of course I hope it moves people in some way.  Perhaps enough to take action with their voice and vote, and bump the needle ever so slightly in the conversation about gun violence.”

Other cast members include Charlene West as Sara Whitmore, Kimberly Ogden as Alex Klein, and Trey Agustus as Tom/Marshall/Security Guy.

A review by the Beachcomber Newspaper proclaims, “When a play is performed that touches our emotions while broaching the struggles of our era, it becomes a sort of prayer. So it is with the marvelous new play by Jason Odell Williams, ‘Church & State.’ ...You’ll laugh knowingly at familiar political and interpersonal tropes, cry helplessly for the seemingly irresolvable issues facing our nation and our world, and possibly think and dialogue deeply subsequent to this profound experience in the theater -- and perhaps even pray.”

Tickets are $11 general admission and $9 for students and seniors, and are available online at http://mjc.tix.com and at the MJC Box Office, open Tuesday through Friday, 12 noon to 5 p.m., or by phoning (209) 575-6776 during these hours. Tickets are also available at the door beginning 90 minutes prior to show time. (Enter the Performing and Media Arts Center from the Stoddard Avenue side of the building and take the elevator or stairs to the 2nd floor - Room 222.)