The keynote speaker for the 24th Annual Martin Luther King, Jr. Commemoration is Dolores Huerta, an influential labor activist and leader of the Chicano civil rights movement who co-founded the National Farmworkers Association, which later became the United Farm Workers.

The event is scheduled for Saturday, January 20, 2018 in the Modesto Junior College Performing Arts and Media Center Auditorium, 435 College Avenue in Modesto.  Doors open at 6 p.m. and the program begins at 7 p.m.  The program celebrates the life and legacy of King and it is open to the public and admission is free.

Students of all ages are invited to participate in a special discussion with Dolores Huerta prior to the main event at 5:30 p.m. in the Little Theatre of the Performing & Media Arts Center, (entrance on the Stoddard Avenue side of the PMAC building.)

The evening also features the presentation of the 2018 Martin Luther King Legacy Award to attorneys Jacq M. Wilson and Jacque Wilson, founders of the Advocates for Justice (AFJ) program which provides pro bono legal representation and assistance and ﬁghts for social, economic & criminal justice. AFJ has also aspired to motivate, inspire, and empower students to achieve academic excellence and make positive contributions at school, in their communities and world. AFJ’s Mentor Program was formed to substantially reduce suspensions and expulsions in Modesto City Schools, to eliminate disparities in education, and to put an end to the school-to-prison pipeline in our community.

The MLK Commemoration wind ups with a question and answer session with Huerta.

Huerta was born in 1930 in New Mexico, the second of three children of Alicia and Juan Fernandez. When she was 3, her parents divorced and her mother took her and her two siblings to live in Stockton, California. Her mother’s community activism and compassionate treatment of workers greatly influenced Huerta, as did her experience with discrimination. A schoolteacher prejudiced against Latinos accused her of cheating because her papers were too well-written.

Huerta earned an associate teaching degree from the University of the Pacific’s Delta College and taught school in the early 1950s. During this period, she married and divorced twice and had seven children. As a teacher when she saw so many hungry farm children coming to school, she decided she could be more helpful to them by organizing farmers and farm workers. 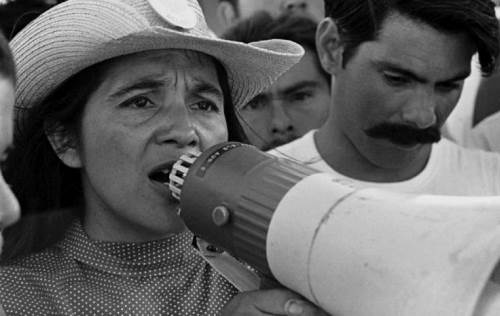 In 1955, at age 25, she began her career as an activist when she co-founded the Stockton chapter of the Community Service Organization (CSO), which led voter registration drives and fought for economic improvements for Latinos. She also founded the Agricultural Workers Association and met activist César Chávez. Along with Philip Vera Cruz, in 1962, Huerta and Chávez founded the National Farm Workers Association (NFWA), the predecessor of the United Farm Workers’ Union (UFW).Dolores Huerta

In 1965, 5,000 grape workers struck, and Huerta was a leading organizer. She faced violence on the picket lines — and sexism from both the growers and their political allies, and from within her own organization. But the strike led to a workers’ contract. In the late 1960s she was the driving force behind the nationwide table grape boycotts that led to a successful union contract by 1970. In 1973, she led another consumer grape boycott that resulted in the ground-breaking California Agricultural Labor Relations Act of 1975, which allowed farm workers to form unions and bargain for better wages and conditions.

Throughout her work with the UFW, she organized workers, negotiated contracts, and advocated for safer working conditions including the elimination of harmful pesticides. She also fought for unemployment and healthcare benefits for agricultural workers. Huerta served as UFW vice president until 1999.

Throughout the 1970s and ‘80s, Huerta worked as a lobbyist to improve workers’ legislative representation. At a time when the feminist movement was taking root, Huerta was an unconventional figure—a twice-divorced mother of 11 children, but during the 1990s and 2000s, she worked to elect more Latinos and women to political office and continues as a champion for women’s issues.

In order to host this free, public event, the organizers depend solely on generous donations of money or services from co-sponsors and donors.  For additional information on sponsorship or the event contact Jim Costello at jcostello@igc.org or 209-402-9191, or Dan Onorato, MJC professor emeritus, at onoratod@att.net, 209-526-5436.